This thread contains two packs that I’ve released over the few weeks: Sharpnel Instrumentality Project and Nightflower Complex. Sharpnel Instrumentality Project is an almost exclusively stamina JS pack, while Nightflower Complex is a bunch of charts I’ve made during the first half of 2021. I hope that there’s something for you to enjoy in either pack.

Sharpnel Instrumentality Project is a 16-chart project that primarily consists of jumpstream stamina charts – MSD difficulty range of 19 to 24. It was initially an 11-chart project, but after some discussion with a couple of people who have organised successful packs of a similar nature, I believe that a 16-chart project would have more staying power and general appeal as a pack.

I initially started this project because I felt that osu!mania and Etterna heavily lacked jumpstream (stamina) charts that had particularly strong structures (from a charting standpoint), and I felt that my jumpstream patterning ability was very lacking relatively, so I wanted to make a pack that would accomplish two things: a project that would hone my charting ability in areas that I’ve ignored for a long time, and a set of charts for a skillset that is very high in demand for a long time but has treated as a joke from a charting structure because of how the charts have been made over the past few years. 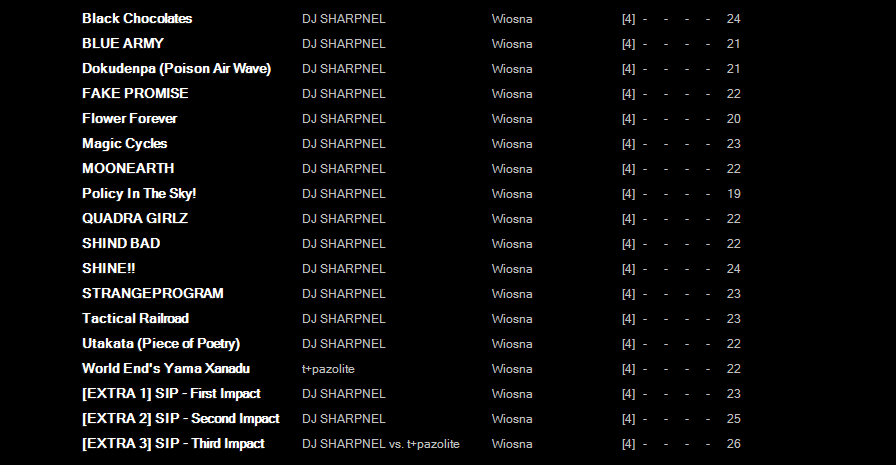 Nightflower Complex is a pack of 15 charts that I’ve made from February 2021 to June 2021 (with the exception of Shuu no Hazama/Rainshower, which was made in November 2020), MSD difficulty range of 18 to 25 (though mostly in the 19-23 range). You can expect a mixture of drum and bass, breakcore, metal, and some odd tracks in-between. There is a general theme of the music in this being mostly dark and grungy, but there are some pretty clear exceptions to the rule (e.g. Nanamori).