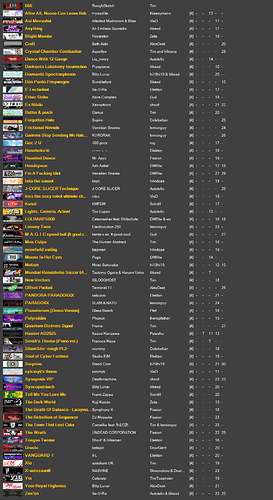 USP for a very long time has been a pack that I always looked to as wonderful collection of exemplary files. After having released stuff back to back since I started back in 2015, I had the idea to start this back in October of last year with the simple goal of making a pack for Etterna that had the same standard of QA as the pack its named after.

This pack has been a long time coming and I’m proud of every ounce of work that went into it from everyone that submitted and participated in the project, thanks for sticking it through.

Credits:
Fission - Worked alongside me judging and reviewing files and maintained a high bar of quality for every file in the pack, he put in hella work as well as submitting files of his own
Kraezyman - Made several of the fantastic GFX sets you see in the pack
wlplpmpn - Came out of nowhere and made well over half the sets in this pack, his work is incredible
Coolboyrulez - Came in clutch with a handful of GFX sets and also got me hooked on FFXIV thanks asshole
Gazelle - ICE mm mm ah he made gfx

tim held me at gunpoint to resync looney tune for 5 hours on christmas eve, did it for the chungus

Hey has Visd released any packs, I really enjoyed the songs he picked and how he stepped them. I’d love more electronic songs from him.