I’m proud (yeah, “proud”) to announce the release of a new collaborative ITG stamina/footspeed pack, chimichungus. This pack contains charts to 61 lighthearted/meme songs ranging from roughly 11 to 27 in difficulty, and with BPMs ranging from 146 to 332. The charts are generally straightforward stream, though there are some funkier ones in the Edit slot. This pack should be played with CMOD on SM5 for optimal enjoyment.

Big Chungus refers to an image of the cartoon character Bugs Bunny, usually captioned with the phrase “Big Chungus” and presented as a game for PlayStation 4 console. The word “chungus” was coined by video game journalist Jim Sterling several years before the meme became popular. Starting in July 2019, the meme regained ironic popularity on iFunny and certain parts of Reddit, particularly as a part of Reddit Moment memes. 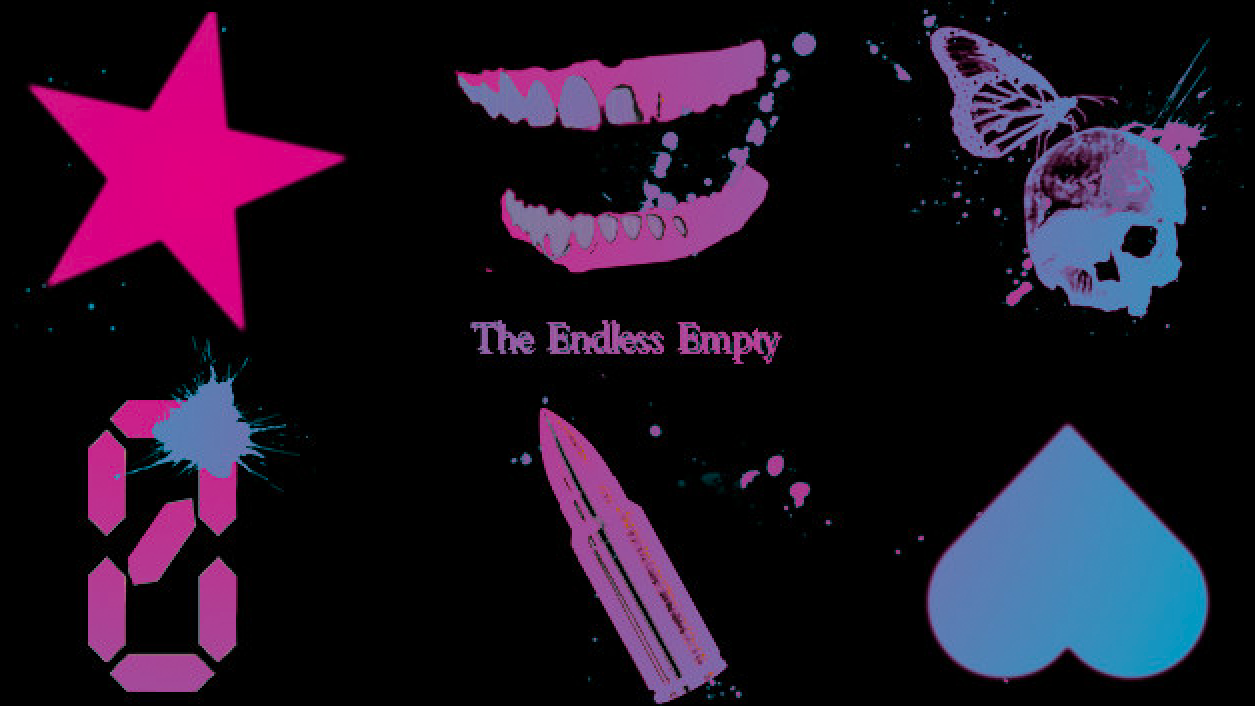 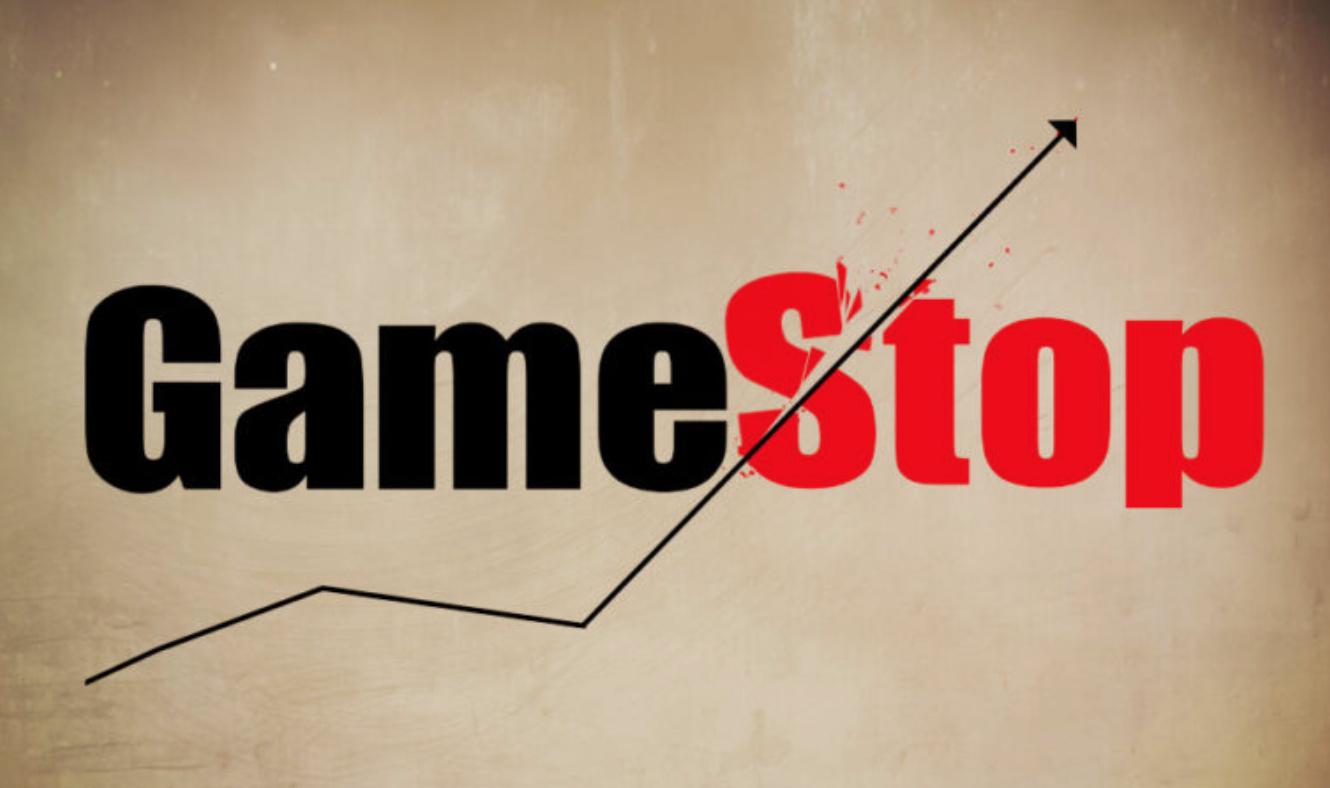 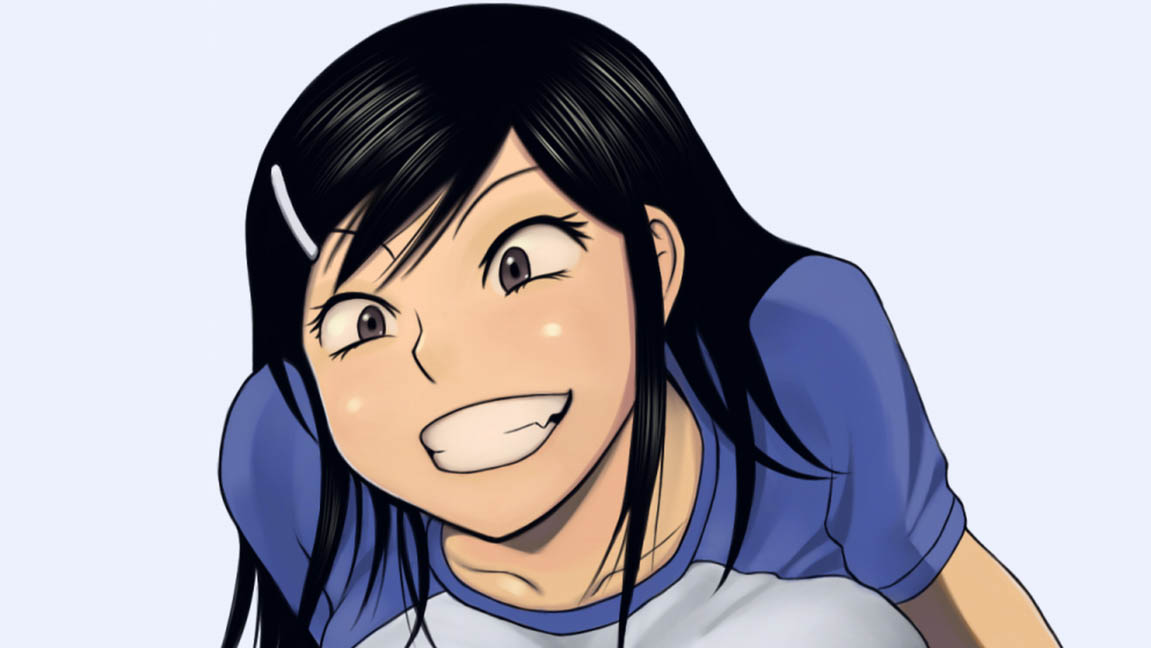 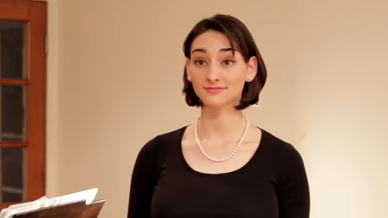 The image of Bugs Bunny appears in Merrie Melodies cartoon Wabbit Twouble , first shown on December 20th, 1941[1]. In the short, Bugs is mocking Elmer Fudd, who in this cartoon was made much more portly than his previous and more iconic design (clip shown below).

On May 27th, 2017, an anonymous 4chan[2] user posted the image of obese Bugs Bunny to /lit/ board (shown below, upper left). The next appearance of the image on 4chan can be tracked to July 19th, 2017[3] (shown below, upper right), with more posts containing it appearing on /lit/ and other boards later that year[4][5].

On July 21st, 2017, Redditor[6] hollerbravo uploaded a screencap of 4chan thread containing the image to /r/4Chan subreddit. On July 27th, 2017, a captioned image of obese Bugs Bunny was posted[7] by Eclectic Memes Facebook group. The post has since been deleted, with copies scraped by Me.me[8] and Onsizzle[9].

The word “chungus” was allegedly coined by English freelance video game journalist Jim Sterling, who would often use it in various meanings without a set definition[10]. The exact date when the word was first used is currently unknown, but is estimated to be prior to December 2012.

On December 26th, 2012, Urban Dictionary[11] user Whidmark submitted an entry for “Chungus”, defining it as a word “meaning anything and everything, including but not limited to a chunky anus”.

On August 8th, 2016, in a Reddit thread exploring the origin of Chungus, Redditor[12] ASuitofT51PowerArmor posted his own description of Chungus based on Sovereign’s speech[13] from Mass Effect videogame. The comment would later resurge as a copypasta in December 2018.

Chungus has no beginning. Chungus has no end. Chungus is infinite. Millions of years after our civilization has been eradicated and forgotten, Chungus will endure.
Chungus is eternal. The pinnacle of evolution and existence.
We are but rudimentary creatures of blood and flesh. We touch Chungus’ mind, fumbling in ignorance, incapable of understanding.
Organic life is nothing but a genetic mutation, an accident. Our lives are measured in years and decades. We wither and die. Chungus is eternal. Before it, we are nothing.
Chungus imposes order on the chaos of organic life. We exist because Chungus allows it, and we will end because Chungus demands it.
Chungus transcends our very understanding. We cannot grasp the nature of Chungus’ existence.

The very first instance of a meme containing the caption “Big Chungus” was posted by an unknown iFunny account on November 27th, 2016, and contained an image of a Second Life life character bearing the nickname (shown below, left).[27] On March 20th, 2018, the image of fat Bugs Bunny was first paired with the phrase by Redditor GaryTheTaco, but was not been made public until it was posted to /r/comedyheaven on December 1st, 2018 (shown below, right)[14]. In a /r/OutOfTheLoop thread launched by Redditor PunkyFickle on December 19th, GaryTheTaco claimed authorship of the image[15], providing further proof in a post to /r/BigChungus subreddit[16]. 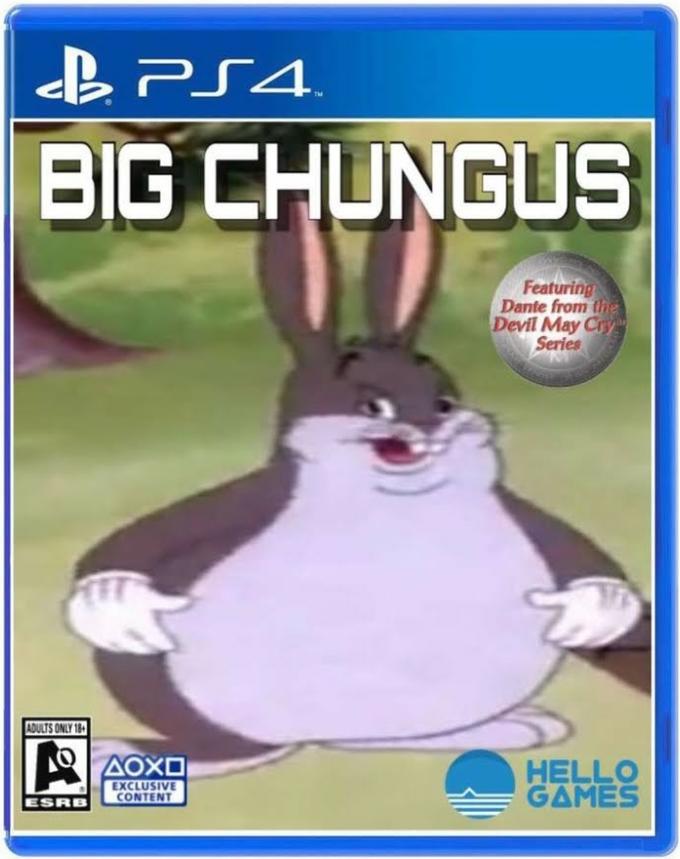 The true story behind Big Chungus is back in March I made the meme to send to a friend when Inwas bored in class, he didn’t think much of it.
Over the summer I sent it to another friend, he thought it was hilarious, so I made Big Chungus 2, then 3, and so on.
Then I just sort of forgot about it until 2 weeks ago when I thought “Hey let’s post it to r/comedyheaven”
It got some traction there, but the real traction came a week later when my friend sent me a post from Facebook of a kid who asked his mom for Big Chungus.
That was later reposted and got 10x the karma as the original Big Chungus, the OP of that DM’d me saying he was a meme thief.
TL:DR it’s just a fat Bugs Bunny PS4 game, that got popular because a clueless mom asked a Gamestop employee if they had it in stock, like the Battletoads trend.

On September 16th, 2018, /r/BigChungus[17] subreddit was created by Redditor youarepepemangay; however, the subreddit did not share any connection with the meme until it gained popularity in December 2018.

On December 7th, 2018, GameStop store manager Justin Laufer made a Facebook[18] post sharing a story of a customer who wanted to purchase a game named “Big Chungus” for PlayStation 4. 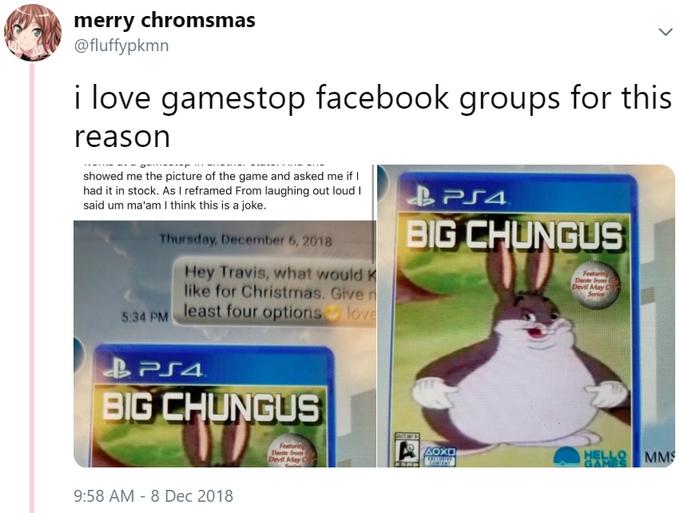 On December 10th, 2018, Redditor[20] j_dot21 reposted a meme originally created by u/republicof_Taiwan[21] mentioning the word “chungus” to /r/me_irl subreddit (shown below, left). The post gained more than 7,900 upvotes over a 10-day period. On December 13th, 2018, Redditor[22] namffauk uploaded one of the screenshots posted by @fluffypkmn to /r/comedyheaven subreddit, where it gained 13,100 upvotes within a week (show below, right). 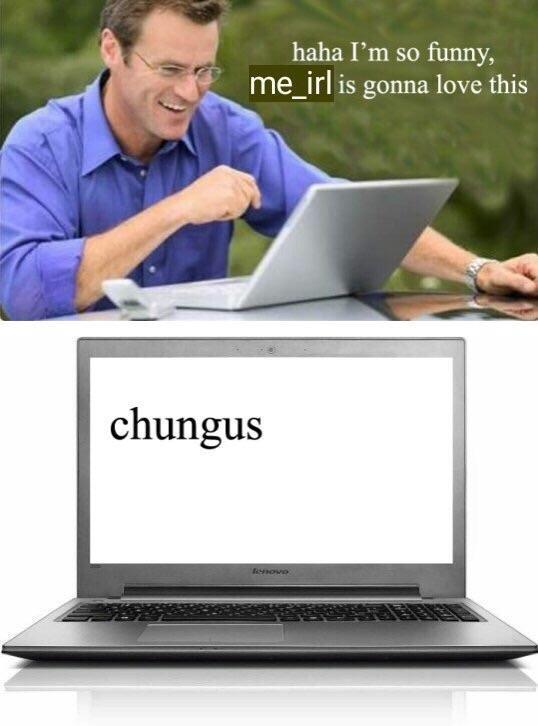 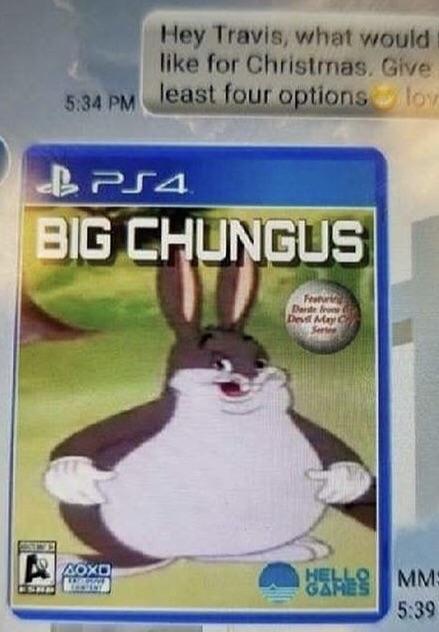 Between December 12th and 17th, the creator of the original image posted Big Chungus “sequels” to /r/comedyheaven subreddit (shown below). 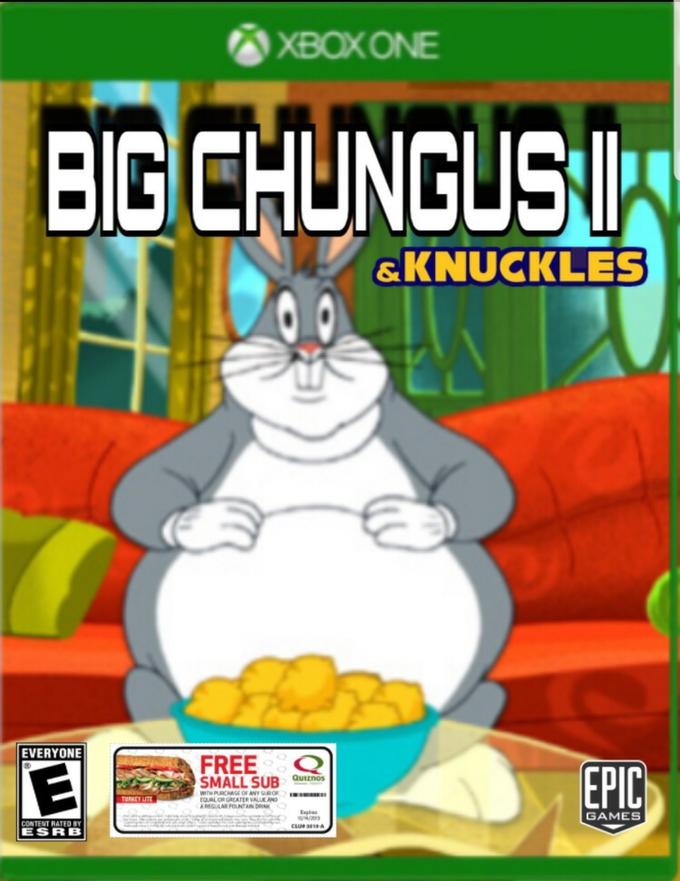 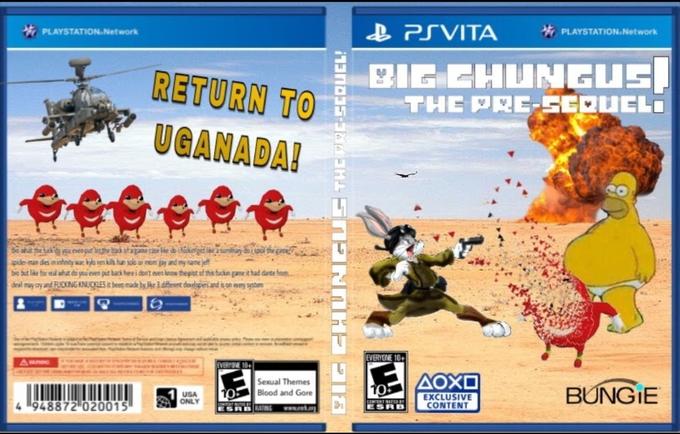 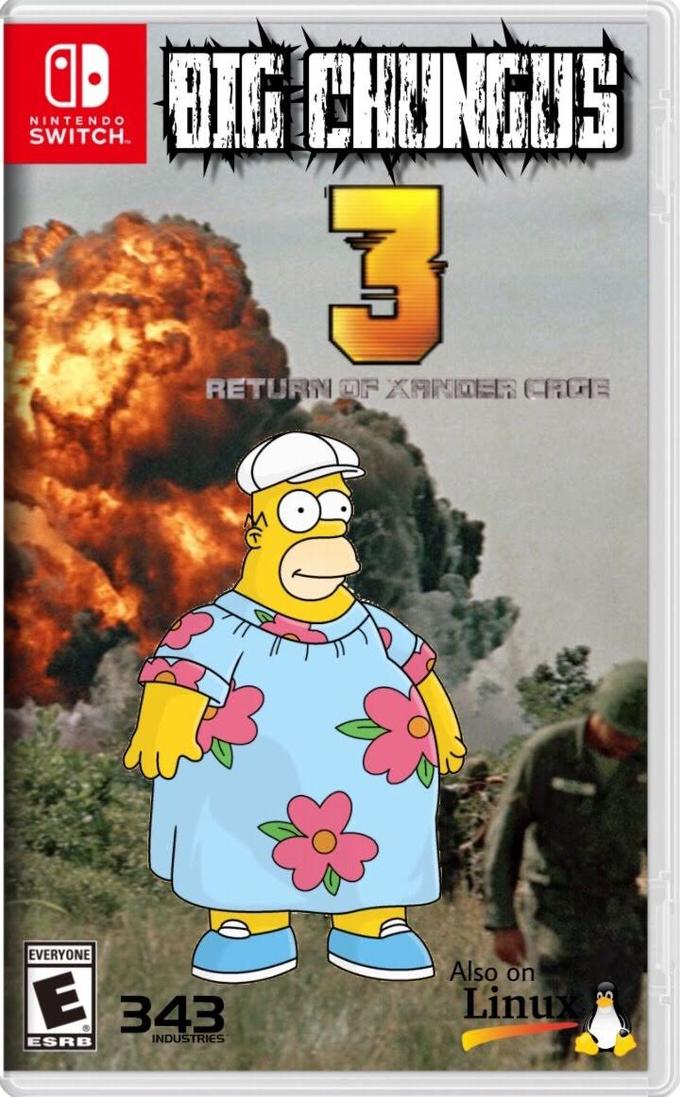 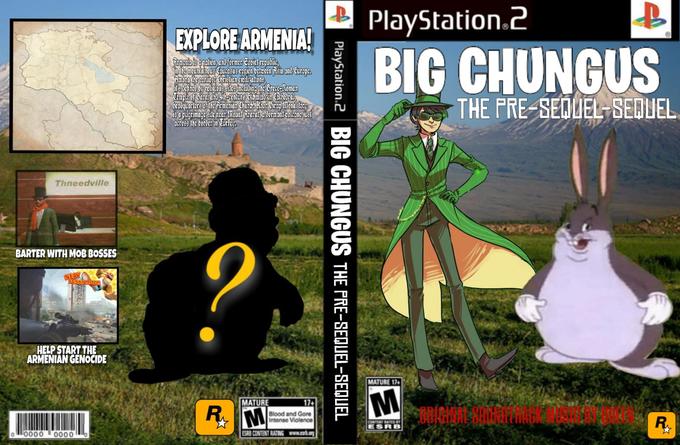 The meme subsequently rose to popularity in /r/dankmemes, /r/sbubby and other subreddits, with users posting new variations of the Bugs Bunny image and editing it into covers of popular video games.

On January 5th, 2019, Redditor turtlenometry submitted a screenshot of a Facebook page for “Karen Chungus” to the /r/BigChungus[23] subreddit (shown below, left). The profile was widely circulated along with references to the Big Chungus and Karen memes, along with jokes about the anti-vaccination movement. On January 7th, Redditor Internal_Blaze submitted a Mafia City-themed image macro comparing Big Chungus to Karen Chungus to /r/memes[25] (shown below, right). That day, Redditor Kwonunn submitted a picture of the woman with a different last name in a post titled “Karen Chungus was fake. (Kinda obvious)” submitted to /r/FuckYouKaren.[26] 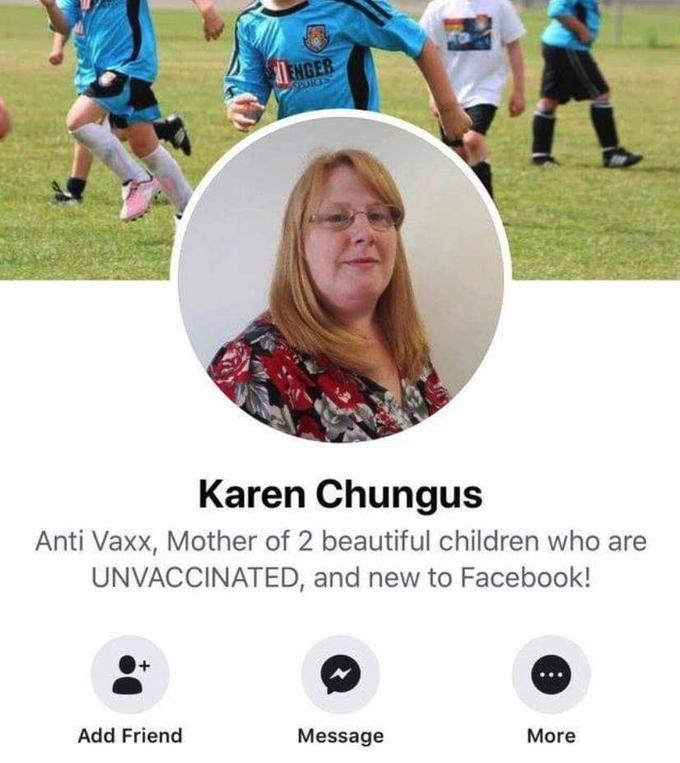 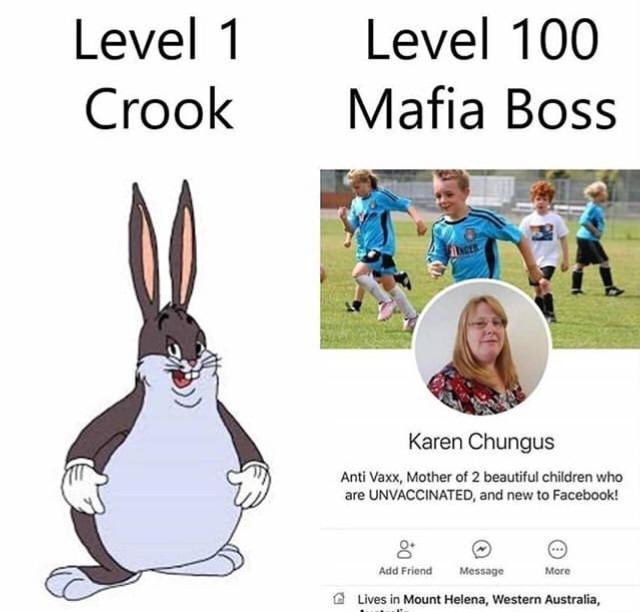 On October 8th, 2019, the official U.S. Army’s Instagram[28] account shared an image of a howitzer artillery piece adorned with the name “Chungus” alongside the caption “Big #Chungus making history. The nine-man team from 3rd Cavalry Regiment recently earned the title of Top Gun.” Within less than a year, the post (seen below) received over 142,000 likes.

Interview with Know Your Meme

On August 21st, 2020, KYM interviewed Braden, the original creator of the first Big Chungus meme, as part of its editorial series that follows up with people featured in meme culture. In the interview, Braden recapped how he came up with the idea for the meme, how he reacted to its spread, and what he made of the online phenomenon. 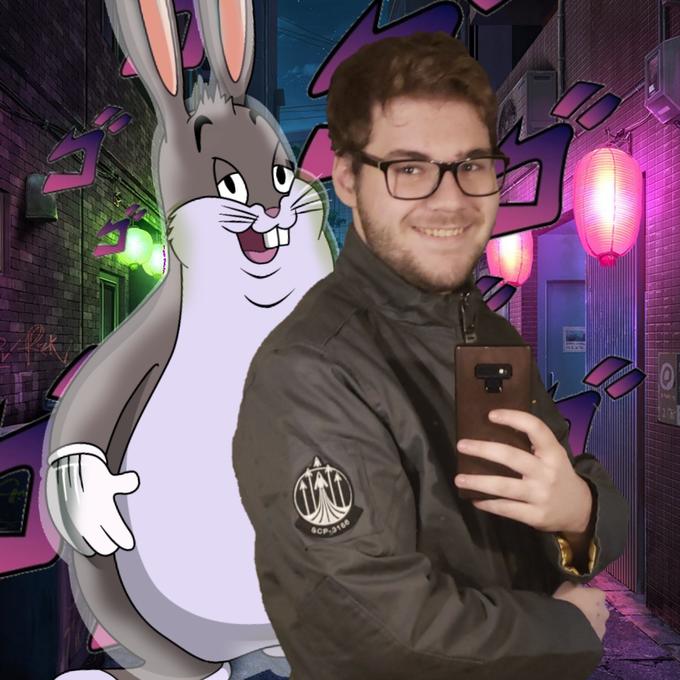 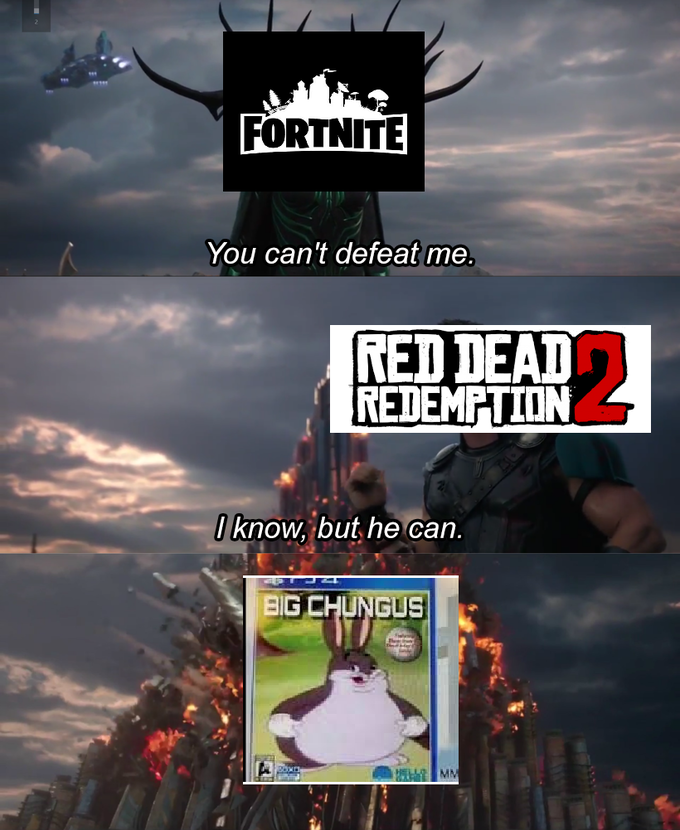 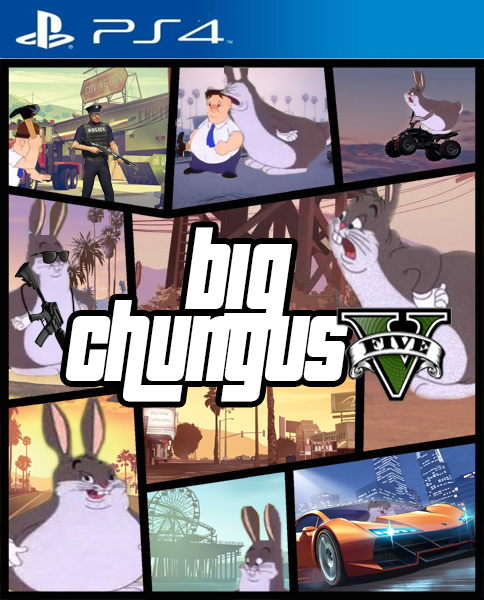 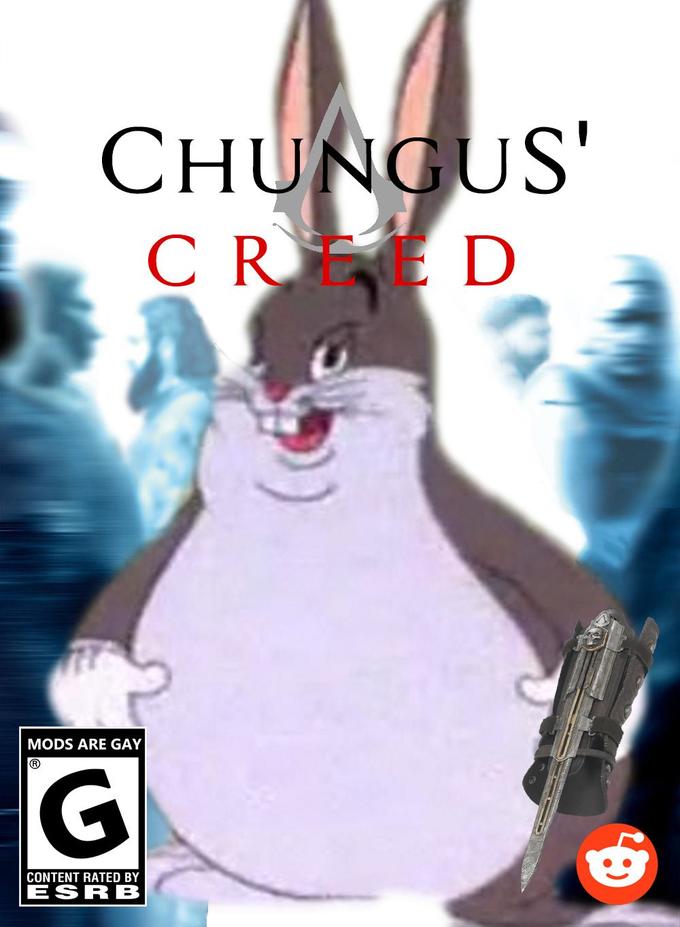 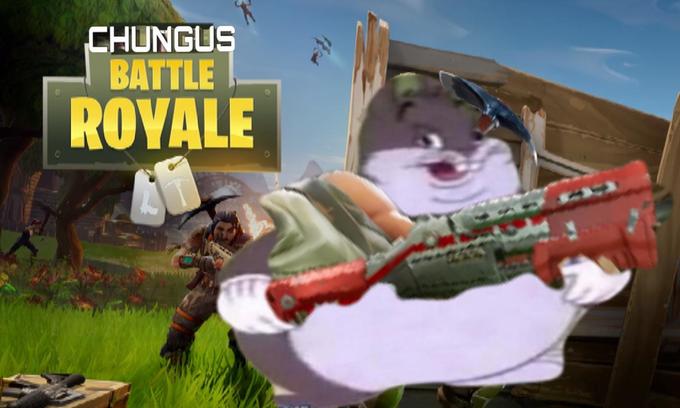 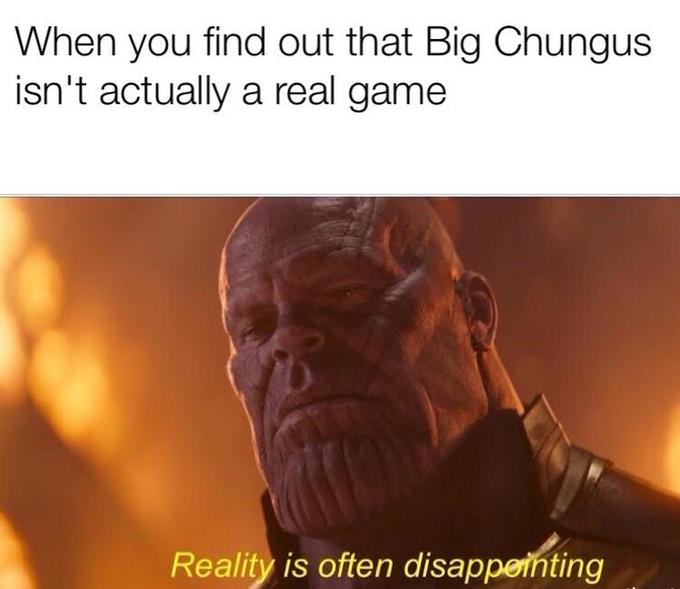 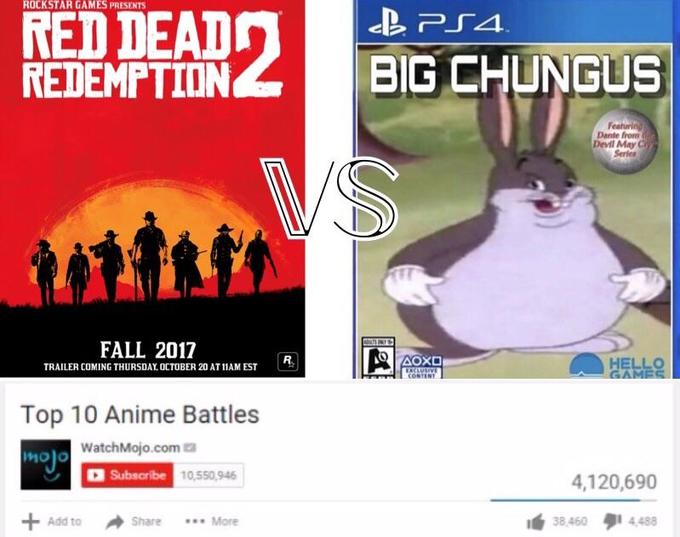 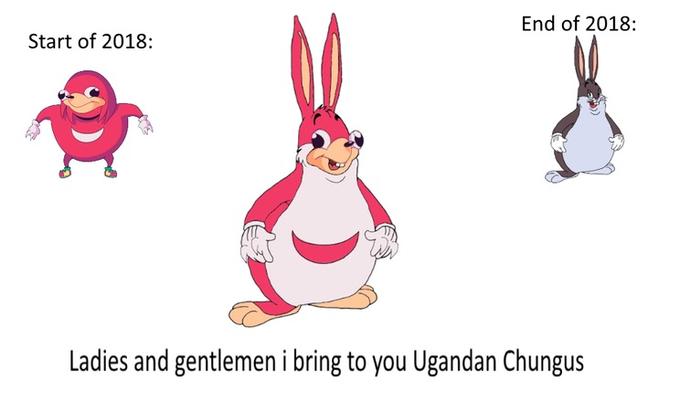 also shout-outs to yutsiChungus who made the pack and Solus for sync.