So, with a new PC en tow, decided to throw myself a bone and take another stab at chart making. previous one was kinda garb, not gon lie, but it was good practice. Finally got arrowvortex, too.

First song I tried worked without a hitch. The second one, however, seems to be unable to work in Etterna.
It is a .ogg file, it’s set up the same way as the first one, all that, it just doesn’t want to appear in the music list.

images with a bit further information - 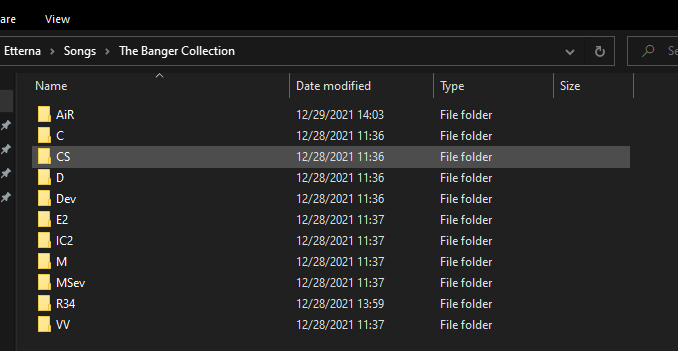 This ^^ is the list of songs. It’s all set up and has the songs inside and all that.

This ^^ is the song that works fine.

Everything seems to be in place, the sm files are almost the exact same, except for the music, the chart itself, and the preview audio.
Gonna add a Banner soon when I get bored of making charts but this is what’s up.

Dunno why it won’t appear in Etterna though (see vvv)

(And no, it’s not because I have ArrowVortex open with the song inside, I already tried turning it off and then reopening Etterna)

Try renaming the folder then reloading all songs (ctrl_Q). It could be cachebug.

yeah, deadass that was the issue. Dunno what this bug is but that’s interesting. thanks for that!