Does a sort by best score exist?

I just want to make sure I’m not being absolutely blind here. 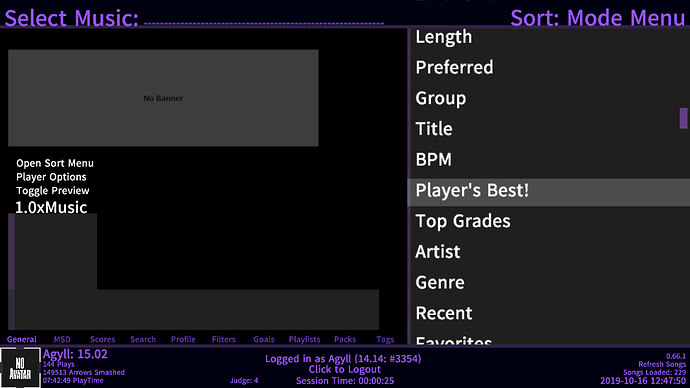 It does NOT do what I expected it to:

This isn’t sorting by my best scores at all. If it was, it wouldn’t be showing songs for which I don’t even have a score yet.

There is a “top grades” sort, but that’s also rather limited, since it apparently only groups by letter grade without sorting the actual % scores. That doesn’t help too much, when you can get an A rank like this, on a song I did somewhat okay on: 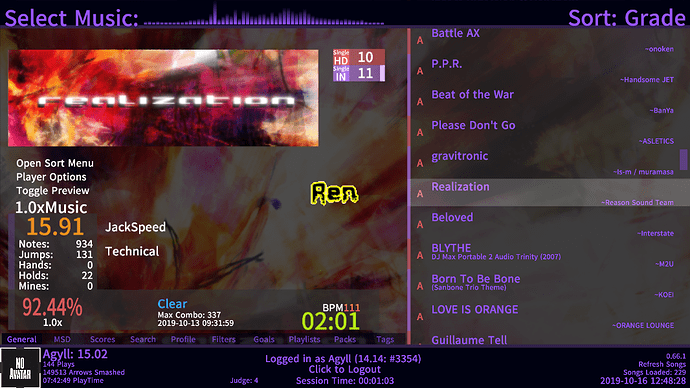 …right next to an A rank like this, which has patterns that maul me and I need to practice very badly: 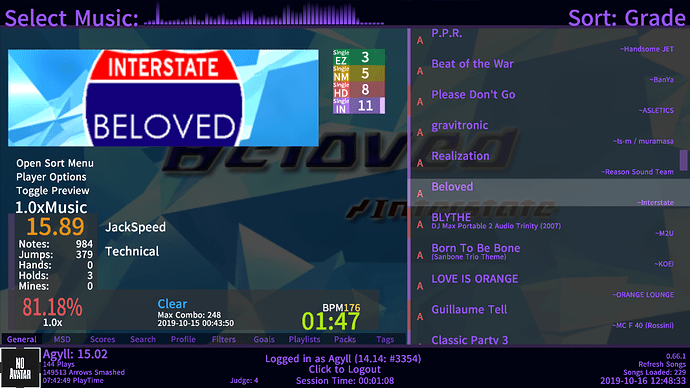 Tl;dr: is there an actual way within Etterna (i.e. without going to the actual score listing on the website) to sort my scores by % best score? Also, is it intentional that “Player’s Best” leads to the “Popular” sort?

As far as I know, most sort modes are somewhat borked in one way or another. Are you specifically looking for a sort that just sorts all song by the best score, by %, that you have on them (i.e, on any chart/rate for that simfile)? Could you ellaborate on how the sort you tried didn’t do what you expected? (From the screenshot it looks like it calls it “Popular”, so it might just be completely broken).

If I recall correctly, there’s something similar to what you want in the profile tab (You should be able to click scores to go to the song)

I am just looking for a sort that organizes by best % score. It would be ideal if this separated the charts by difficulty, but if that isn’t possible, just organizing by the highest % score on each song would suffice for most of my purposes. Everything I’ve played so far was on 1x rate, so rates won’t be relevant.

The “Player’s Best” sort is the sort I thought would achieve this. Instead, it brought up a “Popular” sort, which seems to do nothing more than list some (not all) of the songs I have that come first alphabetically.

And, again, I’m aware that the tables in my profile can be organized by highest WIFE score, but it would be far more convenient if I could do this within Etterna itself.

You can sort by best % accuracy on the website if you play online and visit your profile but to my knowledge there is no way to do this inside the game. However, if you go to the profile button and then click local and then click the file type you want to sort it will sort for you by highest score which may or may not really relate to accuracy, most likely not. You probably knew this already but if not hopefully this helps.
Have a great day!