At this thread, I’d like to share and discuss with you many ideas for developing this game. I was thinking about putting my name in the thread title, but I thought it’s better to put it because I’ll be posting a lot. (LOL)

The first thing I want to suggest is adding additional ranks. It will help players set goals. 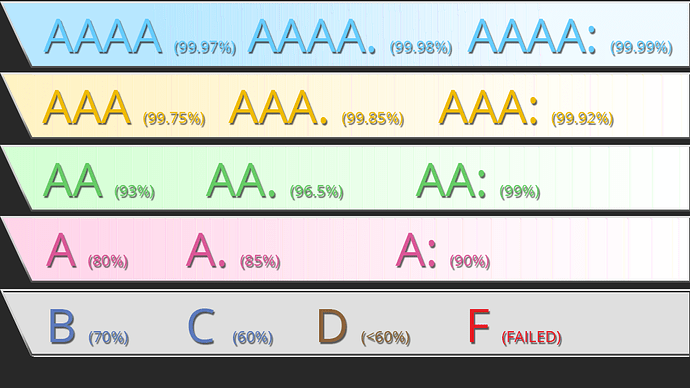 Adding grade tiers is feasible, including adding the AAAAA. What prevents us from doing it is pretty much just for compatibility reasons or just laziness.

The game internally supports 20 tiers of grades, actually. As far as I’m aware, they go unused.

The game internally supports 20 tiers of grades, actually. As far as I’m aware, they go unused.

Well, I didn’t even know about that… I guess they will be useful if the game just apparently shows them (or by just adding additional colors for percents(scores) at the result screen!)

So I think it’s a matter of ingame display rather than making a new criteria (we can literally just pick random percents and make bunch of criteria/ranks). Still, I think more ranks are needed because apparently, the very traditional AA-meta has shown it’s limit, old players are kinda tired of setting AA-goals. Nowadays, every charts are either ‘AA-ble but way too generic’ or ‘way too hard to AA’.

So, A+ around 88 (mid + 80s) and AA+ etc. will be definitely helpful. Still, as I said, it’s rather a matter of design and how apparent it gets displayed.

As it is currently the grades are indeed far too wide, and a lot of the grades are not useful. B, C, D, and F are obviously not things you would aim for ever. The difference between A and AA is obscenely large, basically the difference between damn near mashing and semi competant play. AA to AAA is so large that the AA is basically a useless metric to quickly gauge score quality as it ranges from barely competant to basically an acc run. AAA to AAAA is smalller, however the quality difference is still deceptively pretty sizable (almost halving your SD to achieve from base AAA to base AAAA).

Mid grades would give base goals users would feel reward from (as is already prevalant with say 93 vs 92.5) if percents are based around goals users might aim for (near AAs, max scaling, FC, clean higher MA AAAs, clean higher RA quads). It would also make the songwheel grades more useful for users because they could quickly see score info of value for loads of songs at once. It’d be easy to see which scores maybe you could try to go for the next tier on.

Also coming from an acc player, your AAAA+ grades are way to high and aren’t useful.

I like this suggestion. but if were changing around grades, wouldnt it make sense to rescale F-B grades while we’re at it? it seems silly to use most of the grade letters on hopelessly poor plays, then just starting to stack As for good scores…

Well, I think changing the percent of existing ranks will lead some confusion. Still D, C, B are obsolete though.

Or, we can just add another mid grades B+ (75) etc… but you know, most players don’t set ranks under A as goals, usually. Still this can lead another mashing meta … maybe.

I think changing the current cutoff for the existing grades would be too much of a change because everybody is used to the current percents and they’re pretty set in stone.

i say who gives a shit about the current meta, its like when CC was forced on, literally no one cared except lurker crying it invalidated his scores and lets be real he just did it to be contrarian and shit

I think anyone whos remotely not terrible realizes that 93% AA is sort of garbage, when you play and get a score thats barely 93 it feels like u barely played the file lol lets be real… regarding AAA, AAA+ etc etc being a thing, idk… acc has always been my weakest point and i’ve never really played for acc so i cant speak regarding it, I do talk to acc players alot and realized that the difference between 99.xx scores can be very very large, so idk

I say change it

I agree that a j4 AA is pretty poo poo, yet i feel like 93 should stay as a AA. The meta could just be based around AA+'s or smth.

It basically already is because of scaling and the scale cap of 96.5%.

Mid grades for under A would be useless with current percentages, as it’s not only segmenting mash scores, but it’s highly likely the player has failed anyway when they are below the low 80s range. Barring a very miss heavy score, someone achieving say…a 72 has either encountered an obscene spike that would HP fail them, or has an SD so bad that they are gonna CB rush everywhere and HP fail.

If we change the percentages of the useless grades, they would effectively work as mid grades. However, I feel like it would be less satisfying to the player to achieve a C as opposed to an A or A+. It’s an association thing which would probably make people less likely to want to push hard enough that they end up in the 80s. Not that they should be given a full on celebration for getting an 85 but, grades that don’t make you want to jump out a window for doing so is probably appropriate.

I like AA enough that it shouldn’t be changed, but I also believe A and B scores should be pushed up to 80%+. Something like 80-87% for B, 87-93% for A, as Lights suggested. New players could achieve a B and think they’re making good progress and not be wrong given their poor accuracy. Players who play for passes/practices by brute force can feel as their A has more merit, especially when they bumped it up from a B.

Second thing I wanna suggest is to add AA / AAA / AAAA / AAAAA percent to client (song select screen) and website. It will lead some kind of motivation.

There can be several ways to design it, here’s an example Ithought. 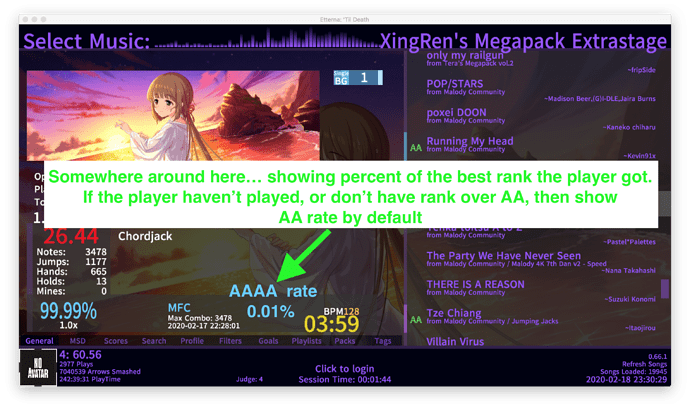 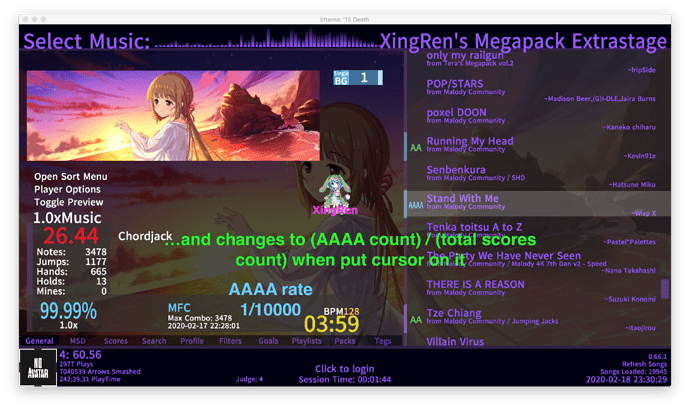