So roughly a year ago I figured that I might as well try putting together my own packs for sm/etterna. The main idea with these releases as a whole was that I wanted to try my hand at making several different kinds of files. This may have been a bad idea, but anyway here they are. A lot of time and effort over the past year went into these packs, and I can honestly say I’m happy with what I was able to pull together. These packs definitely aren’t groundbreaking or mindblowing with new tech, but I do hope some people are able to get some enjoyment out of them.
Special thanks to Deamerai, Autotelic, and Foxfire for playtesting some of the charts.
Disclaimer: I am absolutely garbage at making gfx. Like I was literally googling how to do stuff in gimp when I started work on these packs.

Brief overview of the packs:
Pack 1: FFR charts converted/edited for SM/etterna play and other charts that are generally focused on being technically accurate. A lot of these files are spiky in nature and often play poorly on rates as a result. Difficulties mostly around 17-23 MSD.

Pack2: Dumps and scoring charts. Files that are much less focused on being technically accurate, or are straightforward js/hs charts that make for viable uprate practice. I’ll be honest here though, my M.O. for this pack was literally just picking songs I liked and having fun with patterning. Can’t promise that anybody will actually enjoy playing these files but making this pack in particular was probably the most fun I’ve had stepfiling in years. Difficulties mostly around 21-25 MSD.

Pack 3: Pretty self-explanatory. Not that many files in here cause I feel like there’s already a boatload of great jack and chordjack files out there, I just wanted to try making some myself. Difficulties are all over the place, but chordjack/jack files tend to be pretty rate receptive so downrate/uprate to fit what difficulty level you need. 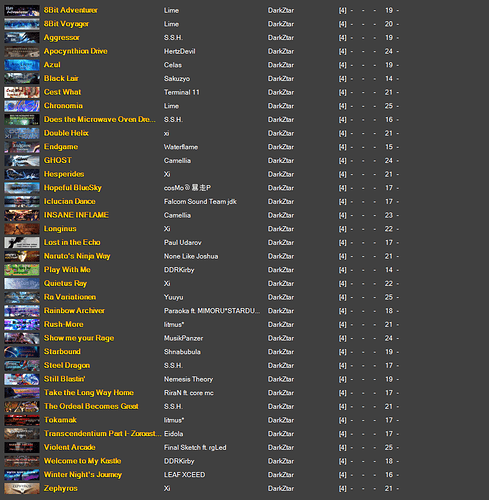