I went far and beyond to search for long note maps to convert for this pack. It includes 253 songs with 271 difficulties to play, which cover a range of difficulty from beginner to literal alien. I hope you like noodles

Etterna doesn’t tell you much about LN difficulty, so I made a difficulty table which should give you a rough idea of difficulty. Don’t follow it religiously though, it’s not that accurate

Thanks to ulti for offering to convert SV changes to .ssc format so you can enjoy some of the maps as they were intended with XMod

Download link, difficulty table, and other info can be found in this spreadsheet
pack spreadsheet 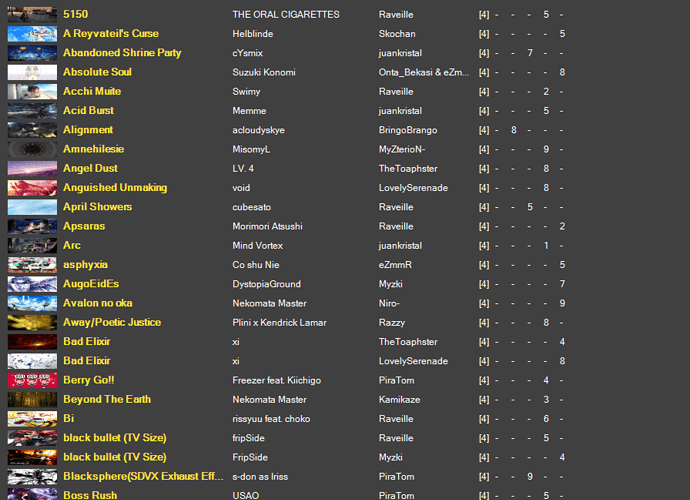 Big, big thanks to everyone below who gave me permission to include their maps

There are a few people’s maps I used without permission because I couldn’t get in touch and they seemingly vanished from the earth. If you know any of the following people, I’d love to at least let them know that their stuff is included

ok guys as expected there were a few issues that made it through to release. i made an extra sheet for updates with zips that only contain the changed files so you don’t have to redownload 1.3GB to update like 2 songs. the main download link will always be the latest patch so if you download after the latest patch, don’t worry about this