I pretty much can’t do jumpstream at all as my playing style, one-handed using 2 fingers, makes this much more difficult. Jumps are not tricky as such, but jumps takes twice as many fingers and there are no extra fingers left, so keeping up at the same speed as normal stream is near impossible. (I’m going to assume most aren’t familiar with this playstyle.)

But I will see what I can do to improve my Etterna Online rating anyway. On the bottom of the jumpstream list in the profile view with a 90% score: 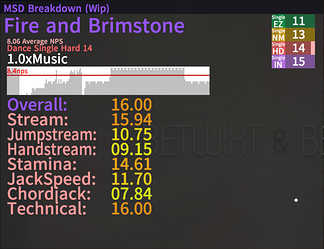 crop.jpg720×554 88 KB
Wait what? This chart has no jumps and of course no hands either… Now I guess why I even have a rating for handstream…

Ignoring that chart, let’s try to find some charts with a low overall rating, but still having some jumpstream. Starting off with rate 0.9x as a precausion. 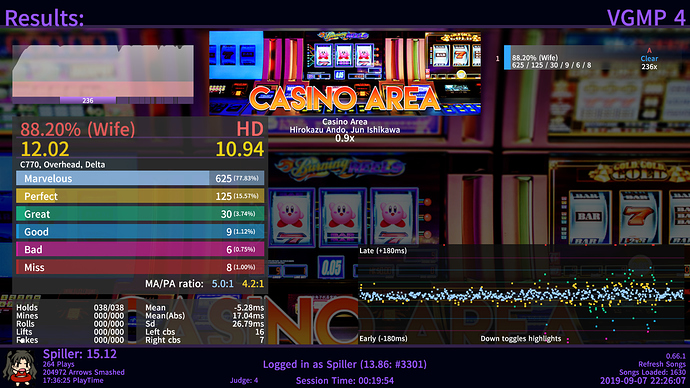 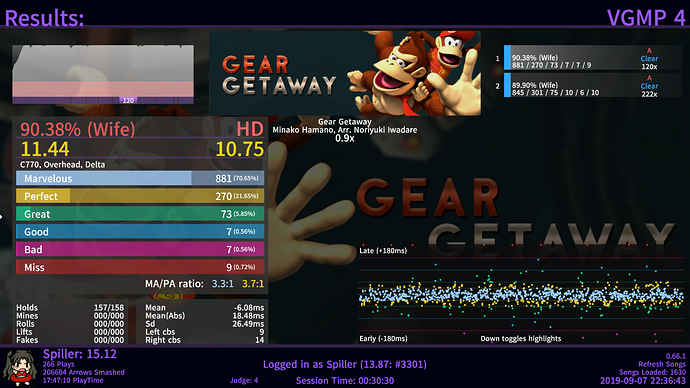 2019-09-07_223643.jpg2560×1440 793 KB
I’m actually quite pleased with this score, this is such a challenging chart to do. Fast jumps, bunch of holds which requires you to get creative with the playstyle to keep up speed/do crossovers, and hands sprinkled all over the chart. Hands get very tricky with only two fingers, three out of the four possible hands can be done by hitting two keys with one finger, but the Left-Up-Right either requires you to lay down you hand and hitting the Left key with your finger joint, or make a fast sideway motion to slide the finger off the Up key to hit the Left key as fast as possible. Either motion is awkward. And for the other combinations, hitting two keys isn’t easy either.
The score still only barely made an impact on my rating though… 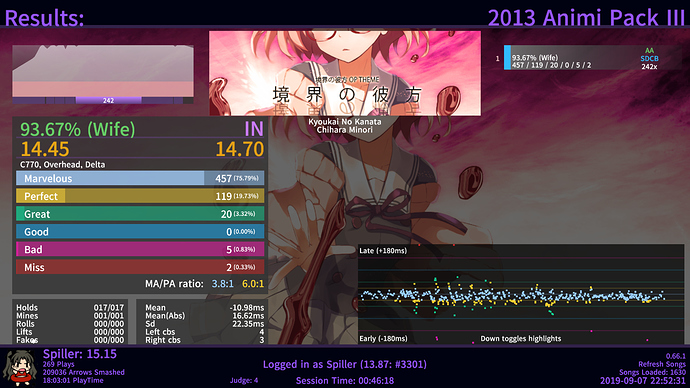 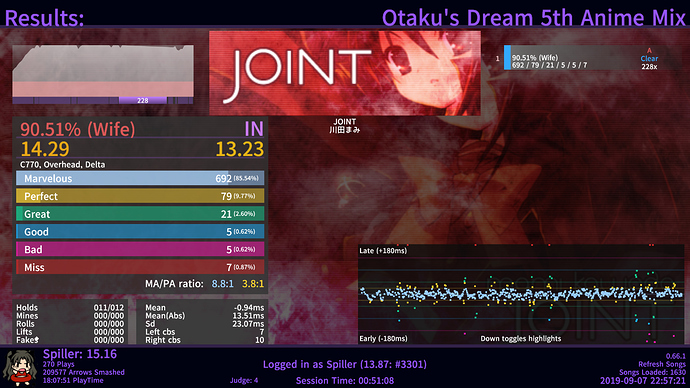 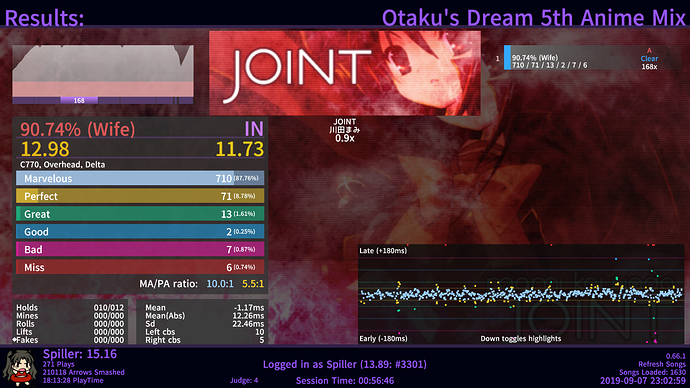 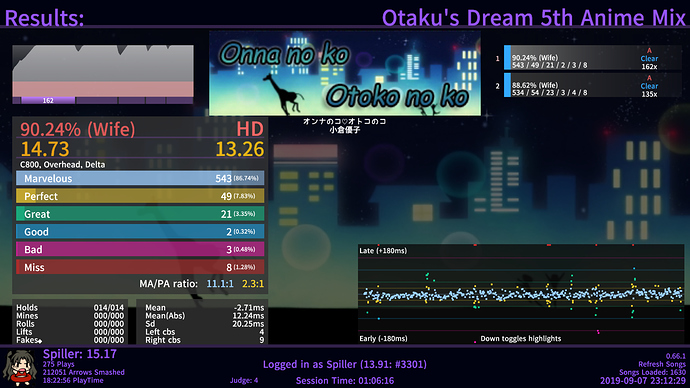 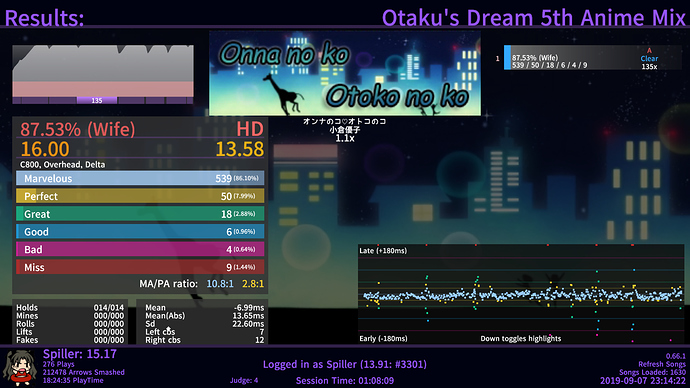 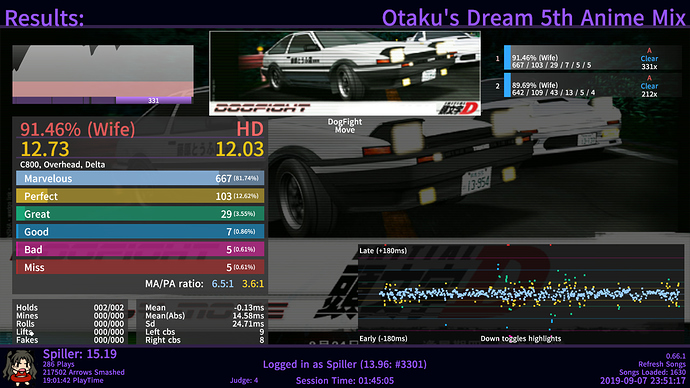 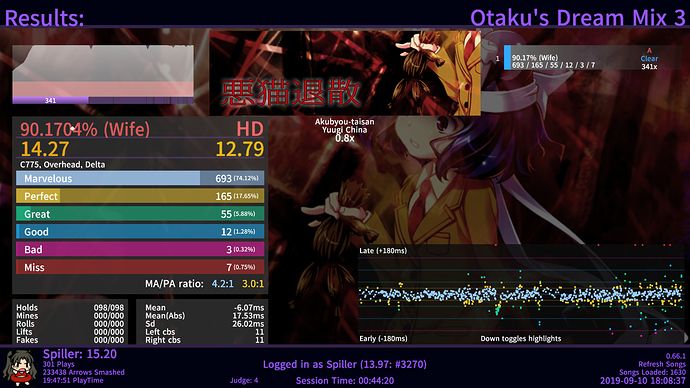 2019-09-10_180837.jpg2560×1440 885 KB
I really like this chart, I used to play it a bunch back when I played with 3 fingers. Rate 0.8 just isn’t fun, but except for the end it feels pretty solid, I can hit all the patterns and even get the hands as well. The end is a bunch of small sections starting with a hand followed by single steps, and while I manage to get the hand it sets me up poorly for the following notes.
Rating wise, this did nothing even though its high jumpstream rating. My score at 1.0 rate actually gives a higher rating at 13.76, but that did nothing as well.

So in conclusion, this endeavor was pretty useless. I managed to push my overall rating from 13.86 to 13.97. For most jumpstream charts, they end up having a bunch of hands as well, or otherwise just being impossible for me to get a worthwhile score on, or even just pass. And of some reason, stream and/or stamina charts tends to get rather high jumpstream ratings, which are vastly easier for me to get good scores on as they just rely on speed. So if rating was all I cared about, I should just stop playing charts with jumps, which is a bit sad.

For improving my rating, I find it is much more constructive just to download a few song packs and randomly play charts with high ratings that seems plausible to get a decent score on. And then you hit some chart:

Many years ago when a friend introduced me to FFR, we would try to play charts with only one hand two fingers to make it feel like DDR with fingers. We had our own idea of how the game was meant to be played, in particular spread being ‘unfair’ play to simulate DDR play (I guess like index vs spread before we knew what they were).

I like the idea of pushing this playstyle forward, but I’m not sure if you can cheese the JS rating with that particular playstyle. You’ll have to find some misrated chordjack files with only jumps for it to be ‘easy’ enough, or learn to hit between the brackets or something.

I used to play one-hand with 3 fingers, and started playing with 2 for charts which were becoming too easy, but I found it way more enjoyable and eventually it became the only playstyle I use. I can’t imagine ever switching to spread now.

Yeah, I now realize I’m not going to cheese the rating. But I think it is because I already cheesed it without noticing it, because the rating system is completely bonkers.
Take this stupid chart I just found trying to find chordjack files: 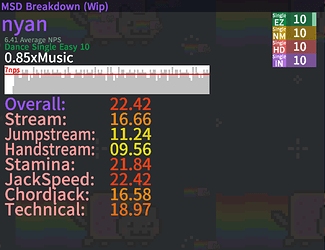 Screenshot (33)-crop.png1426×1096 251 KB
This is one long jack, this chart only contains down notes, no jumps, no hands, holds, anything. (Of course it is quite nerfed.) The jump, hand, and chordjack ratings at the very least should be 0, yet they are not. I’m very curious of how these are actually calculated now, and I will probably look into it to see what is going on at a later time.

I’m a bit sad actually, because I didn’t want to cheese it by playing files not containing jumps. (I’m probably going to do that anyway though.) I would much rather have a much lower rating that actually reflected to some degree how good I was with jumps, so I would have an incentive to improve those skills.

You’ve made an incorrect assumption about how the calculator works. The specific skillset ratings are determined mostly thanks to collecting some numbers and then downscaling those numbers in certain ways based on patterns detected. There are limits to how much the downscaling is allowed to work. Also, the Chordjack skillset is not fully defined, and is still influenced by its predecessor “JackStamina.”

So, if you play a vibro file or any other file with excessively high nps but completely lacking a certain pattern expecting that pattern to be rated 0, that is simply not how the calculator works. Because the calculator is designed to not downscale a skillset beyond a certain point.

A more detailed explanation is available if you want to review the code yourself while also reading the main motivational paper behind the definitions of the skillsets.

I am not sure whether you want to actually “cheese” a skillset rating or not.

Because the calculator is designed to not downscale a skillset beyond a certain point.

So that is by design? That is probably where I went wrong, because I don’t get why you would want that. You mention a motivational paper, where do I find that? I will definitely look at the code once I done with my current project, I just know I would like to try to modify it to better fit my needs and then I might end up with two half finished things.

I am not sure whether you want to actually “cheese” a skillset rating or not.

Of course I want to, that is the entire meta game with a ranking system. Now I know I should stop caring about charts with jumpstream and just work on improving my speed and stamina, because charts with jumps will never improve my jumpstream rating.

I certainly do not like that conclusion. I know I will never be as good as a spread player, but now the rating system also discourages me to get better at certain skills and instead wants me to improve the ones I’m best at.

The original motivational paper, otherwise known as the stepmania chronarticles can be found if you ask for a link to it.
The reason I don’t want to give you a link to the original is because it has comments enabled and all of that turned it into unviewable garbage if you don’t know how to fix it. So here’s a link to a copy (with no edits) that doesn’t have the garbage: https://docs.google.com/document/d/1yeBAGKCXxmh2NLpXaafv_yTl-q2ayUlVT4_fph1Owkg

The metagame for Etterna is playing spread, and thus the calc was designed with spread. If you can figure out index-friendly patterns that spit out an overrated or misrated JS score, then you can chart and submit the scores to ranked, and then play those to inflate your JS ranking.

I personally don’t see the point of that, since this game is more about playing for self-improvement, so you want to increase your rating by playing properly rated harder files. Inflating your JS score with files that don’t represent properly rated JS files is not going to incentivize you to play real JS files, because they will be rated too low for you to care to farm. You’re better off trying to level JS by playing real JS files, and keep mental notes on patterns you can play them on certain BPM. It won’t look good having stream at 20 and JS at 14, but it does reflect your JS abilities better.

Thanks for the link, it looks very interesting.

Inflating your JS score with files that don’t represent properly rated JS files is not going to incentivize you to play real JS files, because they will be rated too low for you to care to farm.

Yeah, I agree (that was why I specifically played charts with jumpstream in my opening post), but I think you missed my previous point that my JS score is already inflated though playing normal files. That is why none of those chart I tried actually gave any significant improvement to my jumpstream score. While I do have quite a bit of technique for playing charts with jumps, it is still not enough to keep up.
It is way more obvious with my Handstream rating which is currently 9.66, but there is no way that score is being realistic. My real score is probably more like ~4 (a quarter of my stream score).

Some of my statements might sound contradictory, but that is because it is a balance of cheesing it and having fun in the process. If I was only interested in getting a high rating, I would be playing spread in the first place.